The Wall Street Journal recently commented on the upcoming military trial of Khalid Sheik Mohammed (KSM).  The article claimed that KSM and four other terrorists were somehow making a mockery of the U.S. justice system by trying to “use the open military trial to promote jihad and discredit American institutions, including the military system of justice.”[1]  Unsuspecting readers might think that an “open military trial” would actually be less reflective of American institutions than the (actually open) civil trial requested for KSM by many of the 9/11 victims’ families.  But the more important question is – are the right terrorists being brought to trial?

That question is not welcome in polite conversation.

For example, last August I was invited to appear on National Public Radio (NPR) to discuss the lasting phenomenon of 9/11 skepticism.  The show’s regular host was replaced by a woman who had clearly made up her mind about the subject.  Ironically, throughout the show she made snide comments about “conspiracy theorists” when referring to the millions of people who don’t believe the official conspiracy theory.  Her other guests, from the Hearst Corporation and Canada’s National Post, joined her in using some variation of this phrase every thirty seconds during the hour long show.  As the sole representative of 9/11 skeptics, I was allowed five minutes to speak until it was clear the conversation was not going as intended.[2]

People listening to this verbal turkey shoot must have wondered what happened to NPR.  Had the “P” suddenly been changed to Propaganda?  Possibly, but what is more important to notice is that, when organizations become effective, they are often co-opted by powerful interests that have hidden agendas.  As reported by Robert Parry, the co-opting of National Public Radio by right-wing corporatists is a great example.[3]  Another example of a phenomenon that has long been co-opted by powerful interests for effecting political change is terrorism.

At a minimum, 9/11 skeptics are willing to consider the possibility that the crimes of 9/11 were not just blowback but were what could be called managed blowback, or the co-opting of terrorism.  Support for this reasoning has been strengthened by the knowledge that al Qaeda was an ally of the U.S. in the recent war on Libya and is apparently working on the same side as the U.S. in Syria as well.[4,5]  None of that is surprising given that al Qaeda was born of the CIA-funded Afghan Mujahideen in the 1980s.

Adding to the suspicion that U.S. authorities are behind terrorist acts are the reports that the FBI has planned such terrorism and has engaged in entrapment of the accused “terrorists” in the years since 9/11.[6]  It appears that the CIA has been caught in the same kind of trickery recently.[7]

When applied to the 9/11 attacks, the concept of managed blowback means that there must have been others involved in allowing or encouraging 9/11 to happen for purposes other than simple retribution or symbolic gesture.  Unfortunately, the 9/11 Commission never entertained any such notions.

“Our aim has not been to assign individual blame.  Our aim has been to provide the fullest possible account of the events surrounding 9/11 and to identify lessons learned.”[8]

Yet here we are preparing to assign individual blame to KSM and a few others.

The 183 water-boarding sessions inflicted on KSM undoubtedly caused mental stress on a level that could not possibly lead to gaining useful information.  Instead, his torture was almost certainly meant to eliminate any information he otherwise might have been able to communicate.  We’ll never know because the tape recordings of those torture sessions, upon which the 9/11 Commission Report was indirectly based, were destroyed.[9]

Perhaps that is better than the treatment we gave to the other leading 9/11 suspect.  Last year we murdered Osama bin Laden without a trial and dumped his body at sea before bothering to get any information out of him about the organization he led.  It doesn’t take a conspiracy theorist to wonder how many lives might have been saved by the capture and interrogation of that alleged terrorist ringleader.

Some might say that, because the 9/11 Commission pointed to OBL and KSM as being the masterminds behind the attacks, its findings provide adequate legal basis for executing OBL and torturing KSM.  After all, we all know who the enemy is, right?

“We learned about an enemy… [whose] purpose is to rid the world of religious and political pluralism, the plebiscite, and equal right for women. ”[10]

Unfortunately, there is significant evidence that the official conspiracy for 9/11 is not based on fact.  For one thing, the accused men were not the religious zealots that the official myth made them out to be.  KSM himself was reported by the Los Angeles Times to have spent years engaging in behavior that was far from that of a devout Muslim.  “He met associates in karaoke bars and giant go-go clubs filled with mirrors, flashing lights and bikini-clad dancers. He held meetings at four-star hotels. He took scuba-diving lessons at a coastal resort.”  No one suspected him “of being dangerous to anything but his bank account.”[11]

What kind of information could this man have that required 183 water-boarding sessions to eliminate?  How could the 9/11 Commission have possibly mistaken him for a religious fanatic?  Maybe we’ll find out in the coming year as the “open military trial” proceeds.

In the meantime, however, it is clear that other suspects should be considered.  My own research has revealed a few “white guys in ties” who, if properly investigated, will lead to the people most responsible for the 9/11 attacks.  Unlike the officially accused, these guys do not just happen to live on the resource-rich lands that Western corporations and governments so desperately need to control in order to maintain their economies.  Many alternative suspects do have strong links to governments and corporations, however, and were in position to actually accomplish one or more aspects of the attacks. 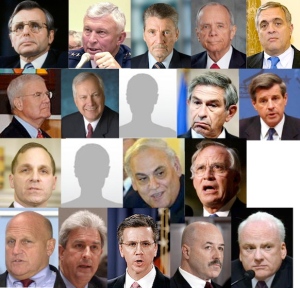 Would such an alternative group of suspects form a conspiracy that better explains the evidence?  That and other questions will be considered in a forthcoming book called Another Nineteen.  Prior to publication, related research will be made available at the website Another19.com, while the government simultaneously prepares to conduct the trial of KSM and his alleged colleagues.

The attacks of 9/11 were most definitely a conspiracy and discovering the correct explanation will require a theory.  Unfortunately, attempts by official story supporters to use ridicule to prevent consideration of alternative accounts have been successful.  Theatrical media accounts and FBI and CIA-arranged terrorist events have similarly propped up the myth of 21st century terrorism and our on-again-off-again enemy called al Qaeda.  But there is a lot more to the story.  Some of us are dedicated to revealing more of the truth and if snide labels make people feel more comfortable and ready to look at legitimate suspects, I’ll take the ridicule.

[4] Peter Dale Scott, Who are the Libyan Freedom Fighters and Their Patrons?, Global Research, March 25, 2011, http://www.globalresearch.ca/index.php?context=va&aid=23947

[7] Paul Harris and Ed Pilkington, ‘Underwear bomber’ was working for the CIA, The Guardian, 8 May 2012, http://www.guardian.co.uk/world/2012/may/09/underwear-bomber-working-for-cia

[8] The National Commission on Terrorist Attacks Upon the United States, 9/11 Commission Report, http://www.9-11commission.gov/report/index.htm

[10] The National Commission on Terrorist Attacks