How Brian Williams Can Regain Our Trust

NBC News anchor Brian Williams is taking heat for having repeatedly lied to the public about an Iraq War experience that he never had. Williams has decided to take a few days off to see if the whole affair will blow over but that strategy is not likely to work given the legs that the story has grown. There is a way for Williams to turn it all around, although it would be tougher than anything he has done in the past. He could save face by coming clean on something important that he once reported and never mentioned again.

On September 11, 2001, Williams was covering the terrorist attacks of the day. Late that afternoon a third skyscraper collapsed at the World Trade Center (WTC) and Williams interviewed a New York City fireman named David Restuccio about it. Just after the building collapsed, NBC broadcast the live scene as Williams remarked, “This is like watching the collapse of an active volcano. And the dust from it is not unlike that from a volcano.” He brought Restuccio on and continued, “You guys knew this was coming all day.” Restuccio replied, “We had heard reports that the building [WTC 7] was unstable and that it would be best if it would either come down on its own or it would be taken down.” 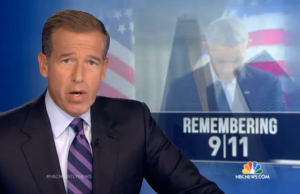 This was the point at which a good journalist would have stopped and asked, “It would be taken down”? How could a 47-story skyscraper be “taken down” just like that, in the same place where two other towers had just experienced unprecedented collapse? Instead, Williams carried on as if he had not heard the remark. He went on for the next thirteen and a half years ignoring many questions about 9/11 and the official explanations for those crimes. For example, Williams reported on the “WTC meteorite,” said to be composed of once molten steel. He claimed that it was evidence of “temperatures as hot as the inner earth.” Yet Williams never returned to the subject to clarify that jet fuel-fed office fires cannot melt steel, nor has he reported on the compelling evidence for how steel could have melted at the WTC.

Many people knew that WTC 7 would come down, not just Restuccio. They didn’t think it might come down—they knew with certainty that it would. The collapse of the building was announced hours in advance and somehow BBC and CNN prematurely reported it as having collapsed long before it actually did.

However, the U.S. government position on the matter denies any suggestion of foreknowledge. And the officially reported explanation for the collapse of WTC 7, crafted by the government agency NIST over a period of 7 years, could not have been predicted by anyone. That explanation depends on a series of unpredictable factors that supposedly came together only minutes, or seconds, before the collapse took place. Moreover, the NIST explanation is known to be demonstrably false.

After the NIST WTC 7 Report was finally issued, California physics teacher David Chandler helped NIST to become more honest about the whole thing. That is, he helped NIST admit that WTC 7 was in free-fall for a period of its descent. In correcting itself, NIST admitted that the building “descended essentially in free fall, indicating negligible support from the structure below.” NIST clarified in its amended Report that “this free fall drop continued for approximately 8 stories.”

As Chandler made clear, buildings cannot free-fall through their own solid structure without the help of explosives. Others, including licensed structural engineers, have noted that many hundreds of high-strength steel bolts and steel welds would have had to vanish instantaneously for an 8-story section of the building to fall without any resistance. This is not possible except through demolition.

There is no doubt that increasing numbers of people will come to know about WTC 7 and its demolition. They will learn about the military and intelligence agencies that occupied the building, and about the powerful people like Donald Rumsfeld who had curious links to the building and yet lied about their knowledge of its destruction. And they will wonder why the media never covered the facts.

This is where Williams has a chance to use his past reporting on the WTC to regain the public trust. We know that reporters often lie to the public and they do it for a number of understandable, albeit despicable, reasons. But as Williams takes a few days off to consider his career in that cycle of deception, he might also consider what future generations will think and where the practices of intentional media deception will ultimately lead. Someone like Williams will eventually recognize the harm it does and use his or her celebrity status to openly call for the truth about WTC 7. It could be him.

4 Responses to How Brian Williams Can Regain Our Trust