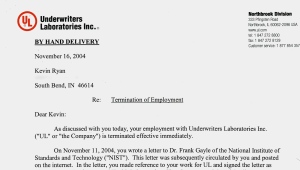 I’m Kevin Ryan and this is my blog.

My work as Site Manager for the environmental testing division of Underwriters Laboratories (UL) led me to begin investigating the tragedy of September 11th, 2001.  UL fired me, in 2004, for publicly asking questions about UL’s testing of the structural materials used to construct the World Trade Center (WTC) buildings as well as UL’s involvement in the WTC investigation being conducted by the National Institute of Standards and Technology (NIST).

Since 2006, I’ve been the co-editor of the Journal of 9/11 Studies and a founding member of several action groups. I’ve also served as a board director at Architects and Engineers for 9/11 Truth and co-authored several books and numerous peer-reviewed scientific articles on the subject. I’ve given public presentations around the country and continue to do research into the crimes of 9/11 in order to help people come to a better understanding.