Nothing is More Racist Than the War on Terror

Americans were outraged over a recent incident in which a group of white kids from Kentucky taunted a Native American elder in Washington, DC. It appeared that a racist mindset played a role in the actions of the MAGA-cap wearing kids as they reportedly chanted, “Build that wall!,” apparently ignorant of the fact that Native Americans are not the target of Trump’s wall. Apologists for the kids later suggested that the their behavior was the fault of the Native American or that Black Israelite protestors had provoked them. In any case, racist ignorance is not limited to kids from Kentucky as it is the signature of the nearly 18-year long War on Terror that a majority of Americans support. 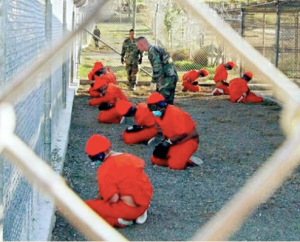 According to a national poll taken in September last year, 56% of Americans believe that the U.S. is “winning The War on Terror.” That dubious war began as a response to the crimes of September 11, 2001 and has been used as the driving force to kill half a million people and destroy the lives of many more. The terrorism that this war allegedly confronts conveniently originates in geographical areas that are most important for the production and transport of strategic natural resources. It also reflects a “grand strategy” that was defined two years before 9/11 by people who are suspected of actually committing the crimes.

The pervasive anti-Muslim racism that has evolved from the 9/11 Wars is a form of cultural racism that requires the victims to have little more than brown skin. The public has become easily manipulated by fear and their most banal, racist tendencies into accepting horrific crimes committed in their names including mass murder, torture, and indefinite incarceration. The victims don’t need to have any solid evidence against them and they only need to look like “the enemy,” to use a dubious term from the 9/11 Commission Report.

An example was recently revealed when a judge stated that the conviction of the first alleged Muslim terrorist after 9/11, Hamid Hayat, should be vacated. Hayat did not commit a crime but was accused of having trained in an al Qaeda camp in Pakistan and of returning as part of a sleeper cell. The evidence presented was allegedly gained from interrogation of Hayat and his father, in which they both accepted what FBI interrogators suggested after long hours of abuse. The father’s “confession” was obviously absurd in that he “described visiting his son’s camp and finding 1,000 men wearing black Ninja Turtle masks and performing “pole vaulting” exercises in huge basement rooms.” Further evidence against Hayat came from the testimony of a well-paid FBI informant, whose own mother said he was “a bagful of lies.”

Nonetheless, in the post-9/11 hysteria fueled by racism, America bought the story of Hayat being a terrorist. This was despite the affidavits of 18 family and community members who swore that Hayat could not have attended an al Qaeda training camp because they saw him every day during the period in question.

Another example of the racism and ignorance that has fueled American perceptions since 9/11 was seen with the San Bernardino shooting in 2015. This was a sensationalized mass murder in which most of the evidence was ignored in favor of an official account that accused a brown-skinned, Muslim husband and wife. Contrary to the unchallenged accusation, the evidence suggests that the attackers were three white men who appeared to be special operations soldiers.

The most important example of how racism and ignorance define public opinion about terrorism involves the first alleged al Qaeda leader captured after 9/11, Abu Zubaydah. One of the forty men still imprisoned at Guantanamo Bay Detention Center, Zubaydah was tortured extensively based on numerous claims from top U.S. leaders that he was a leading al Qaeda operative. Those claims have since been revealed to be completely false. Today, everyone agrees that Zubaydah was never associated with al Qaeda in any way.

The problem that both Zubaydah and the U.S. government have is that the official account of 9/11 was based on information allegedly gained from his torture. We know that Zubaydah could not have known any of that information and that is very problematic for the entire War on Terror. In other words, if not for the alleged torture testimony of Zubaydah and the people he reportedly identified, KSM and Ramsi bin Alshibh in particular, the 9/11 Commission Report would have little evidentiary basis. If Zubaydah was to be released or exonerated, it could bring the whole house of cards down, revealing 9/11 to be a lie. That’s undoubtedly why Zubaydah has now been classified as a “forever prisoner.”

Americans did not question the obvious falsehoods behind the conviction of Hamid Hayat. They have not questioned the obvious falsehoods behind the official account for the San Bernardino shooting. They have not questioned the many other instances in which U.S. authorities blatantly manufactured stories of Muslim terrorism. And they have not called for the release of Abu Zubaydah or the reconciliation of the official account of 9/11 with his false torture testimony.

How can Americans continue to buy into all the obvious falsehoods that have led to the torture, imprisonment, and murder of countless people who just happen to have brown skin? Only willful ignorance and racism can explain why the public accepts and supports these weak excuses for the War on Terror. The outrage at kids taunting a Native American is therefore hypocritical for many Americans. On this Martin Luther King Jr. Day, if we really despise racism we should all speak out against the “starless midnight of racism and war” that began with 9/11.

This entry was posted in 9/11, Terrorism and tagged Covington catholic, Nathan Phillips, Racism. Bookmark the permalink.